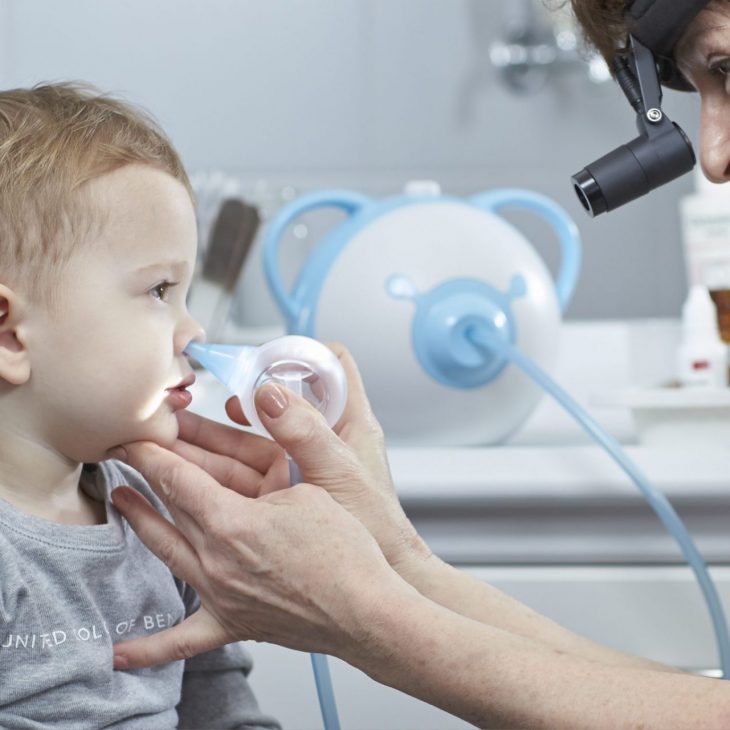 Illnesses of the upper airway in early childhood

Small children cannot properly blow their noses if they catch a cold or get ill. That’s why the secretion stagnating in the paranasal sinuses can get superinfected causing serious illnesses. By removing the nasal mucus, you can prevent several illnesses and medication can be avoided.

In early childhood, little ones catch cold 5-6 times a year. During such illnesses due to the increased secretion production, the secretion accumulates in the paranasal sinuses and this can be the source of numerous illnesses.

With correct nasal aspiration, you can remove the mucus from the lower nasal cavities and from the ethmoidal cells. We can prevent the development of serious complications, accelerate the healing process and prevent medication.

Secretion does not discharge by blowing the nose because the anatomy of the maxillary sinuses and the enlarged adenoid (caused by teeth-growth) does not make this possible.

The maxillary sinus is a crescent-shaped, vertical cavity the outlet opening of which is on top of the cavity and connects to the nasal cavity. According to the laws of physics, the mucus stagnates in the lower part of the cavity and cannot discharge by itself. The superinfected stagnating mucus can cause tracheitis or the inflammation of the middle ear and the maxillary sinuses.

Most children cannot blow their noses due to the enlarged adenoid which can lead to serious problems in breathing and the functioning of the auditory tube. The auditory tube of children is much shorter and steeper so the nasal mucus can get into the middle ear without hindrance.

Middle ear inflammation and conductive hearing loss can easily develop which has a negative effect on both the articulation and the speech development.

The damage of nasal breathing influences the speaking voice, as it can turn into unpleasant nasality.

Children entering a community can have difficulties in fighting off the infections passed on by the others. One illness is followed by the other. Permanent oral breathing leads to a sore throat, coughing and the catarrhal inflammation of the bronchi.

In early childhood, little ones catch a cold 5-6 times a year. During such illnesses due to the increased secretion production, the secretion accumulates in the paranasal sinuses and this can be the source of numerous illnesses.

You seem to be browsing from outside the EU.
You might choose one of our international sites for more relevant content.
USA
Japan
Korea
Stay on this site